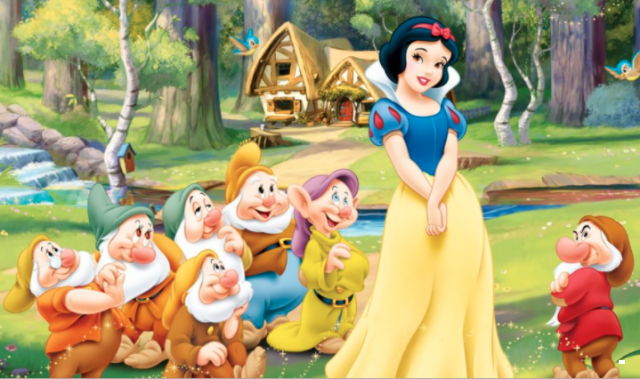 She was arrogant.  She supposed she was the most beautiful.  But the mirror showed the beautiful face of Snow White. The step-mother was jealous.

She decided to kill Snow White. She commanded a guard, “Go, attack and kill Snow White.  Cut out her heart!”   The guard followed the order.  He went into the forest.  But Snow White was so beautiful and innocent, the guard had pity on her.   He was too sad to kill the little princess.

“Go!  Your step-mother wants to kill you.  Go to the forest to hide,” said the guard.

So Snow White went in the forest to hide. She escaped her stepmother. Snow White felt so sad that her step-mother wanted to kill her; she felt alone and abandoned. She had no family and no house.

Finally, she saw a small house. It was an adorable house.  Inside there were 7 small beds.  The 7 beds were beds for 7 small people, called dwarfs.  They had pity on poor Snow White.  “You can stay in our house.  It is small but it is safe.  We can protect you!” said the little dwarfs.

“Yes, thank you!  I can hide in this house.  You are very kind,” said Snow White.  For many years, she stayed hidden in the small house. She was protected in the house of the Seven Dwarfs. She and the dwarfs were very happy.

But one day, the Step-mother ordered “Mirror who is the most beautiful? ”

The mirror showed the beautiful face of Snow White.

“No,” said the mirror, “Snow White is not dead. She is as beautiful as ever.”

“Where is Snow White?” demanded the angry step-mother.

“Ha ha ha! The Seven Dwarves are absent! Snow White is alone. I have a poisoned apple for Snow White. The stupid Snow White will be eliminated! Finally, I will be the most beautiful!” said the step-mother.

The step-mother disguised herself as an ugly old woman. She offered an apple to Snow White. The apple looked like a normal apple. Snow White accepted the apple. She ate the poisoned apple and she fell unconscious. Snow White was in serious danger.  She was not dead.  She was in a deep sleep, a sort of coma.

She slept for a long time!  Years passed.  The dwarves were so sad.  They supposed Snow White would sleep for eternity.

One day, a prince arrived. The prince was handsome and honorable. He saw the tragic scene:  the beautiful princess looked like she was dead.  Snow White was only sleeping. Her face was as beautiful as ever.

The prince loved Princess Snow White. Snow White was the most beautiful of the kingdom. He kissed the princess.

Immediately, the magic curse was broken. Snow White was free!  “Thank you.  You saved me,” she said to the handsome prince. She married the prince and they escaped the horrible step-mother. Snow White and the Prince were happy for the rest of their lives. 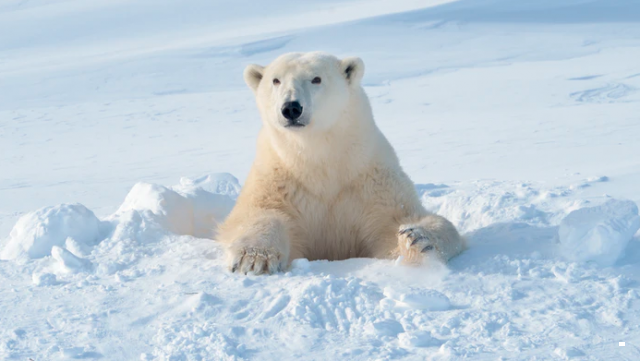 A little polar bear named Lulu lived on a polar ice cap in an igloo. On Christmas Eve, Lulu was very excited and went up to his mum with his eyes shining bright.

"Mum have I been good this year?" he asked. "Of course my dear, you are a very sweet and good little bear" his mum replied.

"In that case, can I write a letter to Santa Claus now?" asked Lulu. "Of course you can," said his mum, "but right after that you will have to go to bed, as it is already quite late."

So Lulu sat down with a pen and paper to write a letter to Santa Claus. "Dear Santa Claus, I hope you and your little helpers are doing well. This year, I would like a few things, they are:

A long woolen scarf (as it gets cold here sometimes). a wooden sledge, a fishing rod . It is okay if you can?t bring along all the gifts, but just try and get what you can. Thank you and lots of hugs and kisses, Lulu

Thinking of all this Lulu went off to sleep. In his dreams, he saw an old man with a long white beard, a sack filled with presents and a sleigh that could go as fast as the wind.

Next morning Lulu woke up very early because he had a lot of things to do. He got his bag ready and kept his lunch and the letter to Santa in it. He said goodbye to his parents and headed out to post the letter.

The post box where Lulu would post the letter was quite far, but Lulu was a brave little bear and did not stop with the cold winds or the high hills. Through the way he got tired and decided to take some rest. He sat down on a block of ice and fell asleep.

Suddenly, he woke with fright. The sunrays had melted the ice and he was trapped in the ice cold water. "I am lost," he thought "and I won?t be able to post the letter or go back home."

It was almost dark now and even as Lulu was crying, suddenly he saw a light up in the sky. It was Santa Claus?s sleigh that was being pulled by his reindeers! Suddenly the sleigh slowed down and Santa asked Lulu "Are you coming with me my dear? I have come to take you back home." As Lulu got into the sleigh, he rode over the ocean and hills and he was so happy he forgot to give his letter to Santa. He was living his biggest dream ever!

In some time, the sleigh reached his igloo and Santa handed his wooly hat to Lulu, helping him home and then disappearing into the night. His parents were delighted to see him back home. "We were so worried," they said, hugging him tight. Lulu told them all about the incident and said that Santa had given him the best present.